Call Us Email Us
Close Shelf

The Diocese of Ohio is part of the worldwide Anglican Communion represented in the United States by The Episcopal Church.

The Episcopal Church of Ohio ministers in our Church and in our communities in many inspiring ways.

The offices help support parishes by providing resources, organizing events, and other activities.

Browse our library of online resources as well as those available in our Diocesan Resource Center. 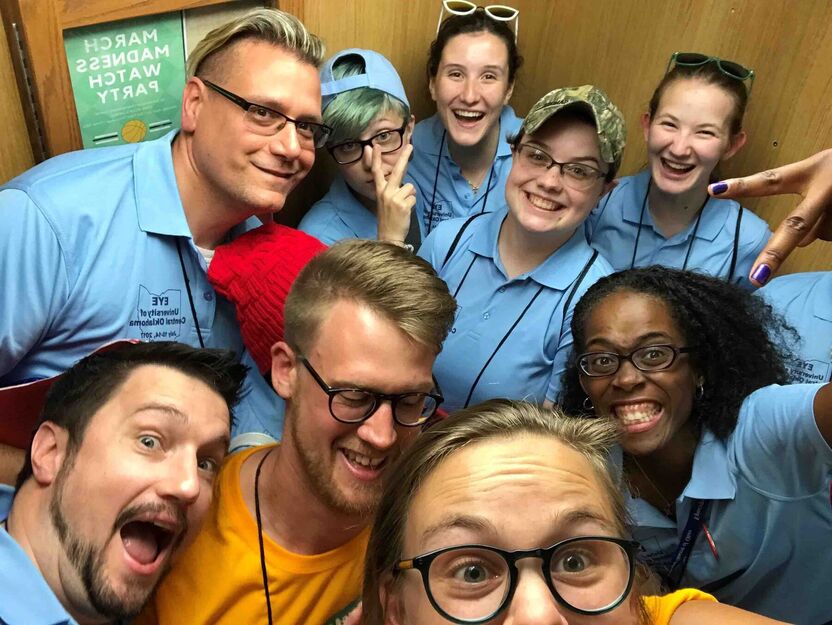 This year's Episcopal Youth Event (EYE) was held at the University of Central Oklahoma. EYE is a triennial event and is the second largest gathering of the Episcopal Church, attracting nearly 1200 high school youth and their adults leaders from across The Episcopal Church. 2017 marked the thirteenth EYE.

We had amazing church services with incredible live music in the mornings; the services and the music were performed in both English and Spanish.

“To be there and see everyone enjoying themselves while worshiping the Lord really made me feel closer to God and really feel a part of the Episcopal community," said Serena Walker, member of Trinity Cathedral.

In celebration of the Diocese of Ohio's bicentennial, we had the opportunity to bring four teens from our companion Dioceses of Belize and Tanga. They arrived three days before EYE and stayed in host families for the weekend. My family hosted a teen from Belize, her name is Cheyenne. We spent the weekend sightseeing, going to the movies, and shopping. It was wonderful to get to know and spend some time with her before EYE.

The theme for EYE17 was Path to Peace, how we can all become peacemakers in our communities and the world. The praxis sessions reflected this theme, with sessions like how we can bring more peace and grace into tough conversations, and how to speak the truth calmly and compassionately in a violent world.

Ceclia Payne, member of St. Paul's, Cleveland Heights, described the sessions saying, “I saw God in everyone who was so open and willing to be vulnerable with each other so that we could all grow within our faith."

In addition to the sessions, we had free time to go around and meet other people from other dioceses from around the world. It was fun giving out our Diocese of Ohio sunglasses and make connections with different people. I had a great time talking with people from the Dioceses of West Virginia, Milwaukee, and Maryland.

We had a day to explore Oklahoma City. We went to the history museum as well as different churches. At one church, we made placemats for an inmate program they run. At another, we decorated bags that will be used to deliver meals to the elderly. We went to the Oklahoma City National Memorial and Museum. The museum was set-up like a timeline; it took you through everything that happened that morning and all of the events that occurred afterwards. We then went to the Cathedral of St. Paul's where there was a huge carnival, complete with inflatables, food trucks, music, and games. After the carnival, we processed back to the Memorial & Museum and had a candlelight vigil at the reflecting pool.

“It was peaceful and beautiful and you could feel the connection that everyone had together and it was truly a moment where you could feel God. I don't know how exactly to put it into words but it was one of the greatest moments and most powerful things I've ever experienced,” said Anne Holland, member of St. Matthew's, Brecksville.

I was lucky enough to attend EYE twice. It has been an amazing growing experience for me. When I went to EYE14, I was extremely shy and hardly talked to anyone. It took awhile for me to really start to enjoy myself at the event. This year, I had a rough idea of what to expect and it took me no time at all to start having a good time. It was also great having Bishop Hollingsworth around, especially during our boat ride. He had so many funny jokes which made the ride much more entertaining.

Going to EYE17 made me feel so much closer to the Episcopal community and with God. I am so grateful that I got to experience EYE (twice) and that I got to go with an amazing group of people.

Resources for clergy and lay leaders.

Designate a Gift to Your Parish or the Diocese

Let us know if you have any questions or are in need of assistance.